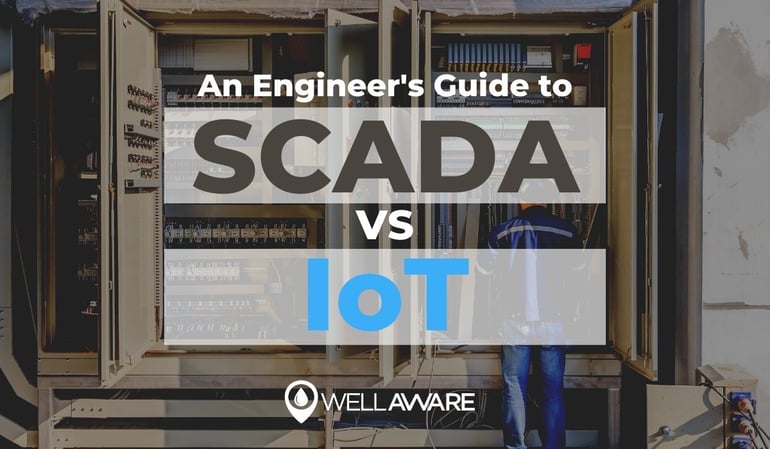 SCADA vs. IoT. It's a years-old debate, but it most often occurs between industry analysts, IoT vendors, and desk jockeys. Our goal in this blog is to provide an engineer's perspective on the important differences between SCADA and IoT.

Ask any engineer what their top 3 goals are for the year, and they’ll probably tell you some version of the following:

Or, if they’re feeling overly stressed, they might say “Whatever it takes to do more for less.” This is a common refrain for the modern Operations Engineer, and one of the reasons we love working with them.

If you are an engineer in a critical industry like oil and gas, water & wastewater, agriculture, or manufacturing, we know you have a challenging job. You serve as a critical connecting point between field operations teams and corporate management - extracting value out of each asset you manage in order to maximize revenue at the lowest possible cost. As you navigate these challenges, you are probably looking for better tools.

One of the most common concerns we hear from Operations Engineers is that their company’s SCADA system doesn’t provide the quality of data they need to make informed decisions that lead to better performance. As such, some are evaluating whether to utilize IoT-based remote monitoring solutions to replace, expand, or augment their SCADA system.

But what is the difference between SCADA and IoT for an engineer? Aren’t they the same? Well, yes and no. In this blog, we’ll highlight the core differences between traditional SCADA systems and some of the more modern approaches to remote equipment monitoring. Before we get there, let’s make something clear...

SCADA is one of the primary sources of data for Operations Engineers. Sure, some engineers rely on daily updates from site personnel, but the majority of engineering teams have some kind of remote monitoring system to gather information from at least some critical operations equipment.

And the reality for most Engineers is that they aren’t thrilled with the quality of their SCADA data. Sure, they get by with what they have, but most Engineers will tell you that their SCADA system data lacks the reliability, resolution, scope, or ease of use for them to really excel in their data analysis*. 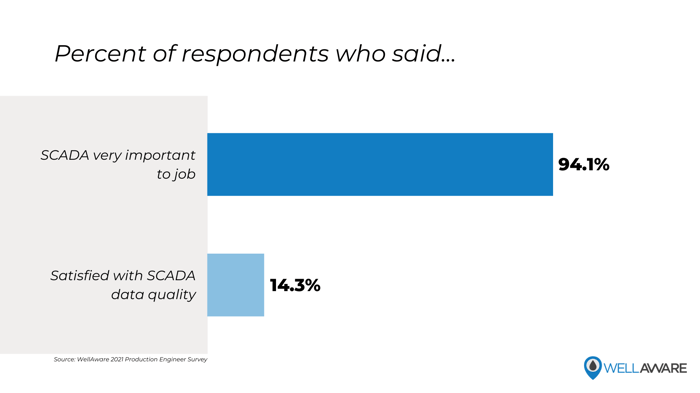 *WellAware sent a survey to hundreds of Engineers in 2021. Almost 95% of respondents said that SCADA data was very or extremely important for them to do their job, but less than 15% were completely satisfied with the quality of data from their SCADA system.

This is why so many Engineers are looking for alternatives. For those trying to understand IoT-based systems a bit better, we’ve outlined 4 core differences between SCADA systems and modern IoT-based monitoring and control systems. Here they are.

As we all know, SCADA stands for “Supervisory Control and Data Acquisition” - a term that emerged in the 1970s to describe technological advances that put digital information (aka data) in front of operations personnel so they could track equipment diagnostics more quickly.

We won’t bore you with a full history of SCADA, but suffice it to say that SCADA systems were originally intended for use by site operators at a particular facility or a limited geographical region. Core SCADA features included:

All of these characteristics were designed for a singular purpose: to give the equipment overseers real-time visibility and control over a distributed infrastructure. SCADA has accomplished this purpose admirably throughout the years.


Unfortunately, the architecture hasn’t changed much since then. To do their jobs well, modern engineers need large, reliable, structured datasets to analyze in aggregate so they can discover larger optimization trends that lead to the most significant ROI. SCADA was never meant to serve this function, and in the decade or so since cloud-based computing began to proliferate across critical industries, IT teams have attempted a patchwork of data adapters to try to make data more available or usable to engineers. The results have been… uninspiring.

Unlike SCADA, modern remote surveillance systems are designed for the primary purpose of gathering data for analysis. Whereas SCADA networks often use machine protocols all the way from equipment to HMI, current remote monitoring technology seeks to translate machine languages into open internet protocols as quickly as possible. This single design characteristic does wonders for improving data governance, reliability, and accessibility, which is what Engineers need for better data analysis. 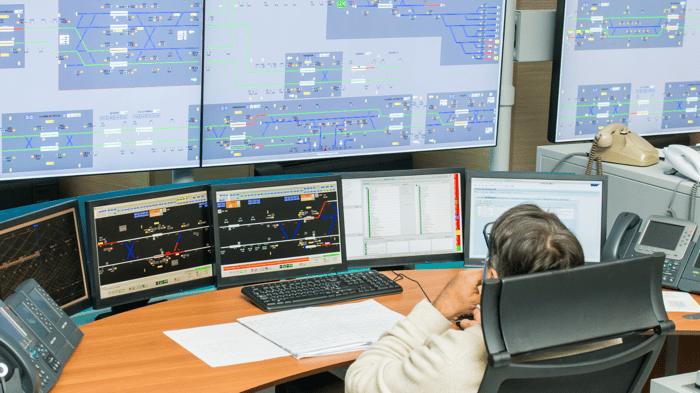 Production engineers don't have the time to sit in front of SCADA screens to get the data they need.

SCADA is for field operations, IoT works for the whole team

As mentioned above, the original intent for a SCADA system in heavy industries was to serve a select group of site and field operations personnel with direct oversight for operations equipment. SCADA was never meant to serve Engineers, Accountants, Marketers, or Executives. Despite many attempts to bridge the gap - each with varying degrees of success - SCADA still creates data siloes that isolate valuable information away from important stakeholders. As the saying goes, you can’t teach an old dog new tricks.

By design, SCADA architectures focused on features that enabled better real-time management of equipment. It’s a response-driven framework, designed to alert equipment overseers of warnings and faults, and give them supervisory control to correct them ASAP.

But as we mentioned in the prior section, this “real-time” nature of a SCADA system does little to serve those functional groups that need to identify large-scale trends to assure production, maintain asset integrity, optimize process systems, and lower operating costs.

This should be easy, and most newer remote monitoring systems make it so.

SCADA is complex, IoT is simpler

As we’ve discussed, SCADA has been around for decades. Over those years, more and more features have been added to the SCADA zeitgeist, making most SCADA systems exceptionally powerful and customizable. For many managers of complex industrial processes, having many levers to pull and dials to turn makes SCADA even more valuable; they appreciate the complexity because it can account for nearly every eventuality.

The flip side of the coin, of course, is that SCADA can be… clunky. Let’s be clear here: most new-age software developers aren’t signing up to build SCADA systems. They’re developing mobile apps and web platforms. As such, SCADA can become a kludgy mess of features layered on top of each other without proper design consideration. Ask any Engineer who has tried to extract data from a SCADA system without IT or SCADA engineering support, and they’ll likely agree.

Newer remote monitoring systems, however, are often designed explicitly to be lightweight and low maintenance. They may lack the bells and whistles of a full-blown SCADA system, but for most Engineers, that won’t matter. In fact, most Engineers don’t even care to be able to use remote control features of SCADA systems.* 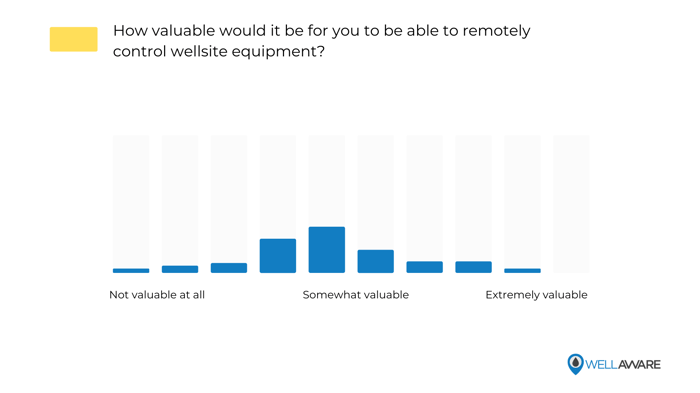 *According to the same 2021 Engineer survey, less than 30% of respondents said that remotely controlling operations equipment would be even somewhat valuable.

For most Engineers, the goal of accessing a remote monitoring system is to acquire high-quality aggregate data that they can view in detailed trends screens, or build customized business intelligence views. To do this, they need that data to be available, and they need the interface to be intuitive. A good, modern remote monitoring system can accomplish both of these purposes.

Most medium-to-large industrial companies have an internal team dedicated to managing their SCADA system. SCADA buildout usually occurs as a part of the facilities engineering phase, and spending often gets lumped into an authorization for expenditure (AFE), utilizing capital budgets to set up the many SCADA components:

As the previous section made clear, SCADA is beefy, and so is the equipment to support it.


This is especially challenging in the capital-constrained operating environments like those that US oil & gas are experiencing today.

Modern IoT-based remote monitoring systems often take a different approach. In some systems, at the very least, software access might be delivered under a “Software-as-a-Service” (SaaS) model, where users pay a monthly fee on a per asset, per data point, or per user basis. In this case, hardware may still require CAPEX funds, but at least some of the capital burden is alleviated by the SaaS model.

Recently, remote equipment monitoring vendors (like WellAware) have taken it a step further to amortize the cost of data monitoring equipment and include it in the subscription fee, either under a rental model or lease agreement.

Why is this valuable to an Engineer? Because it makes data acquisition both accessible and immediate. Quite frankly, Engineers don’t want the burden of managing new equipment. They just want accurate, reliable data so they can do their jobs. With the right remote monitoring system, they can access new or upgraded data streams solely on OPEX budgets.

IoT-based remote monitoring systems can be a flexible and affordable way to get higher equipment monitoring data quality.

So should you choose SCADA or IoT?

Look, SCADA still has a place in many industries. It has served a vital function for decades, and we expect it to continue to do so for at least one more. That being said, the lines between SCADA and IoT are starting to blur, especially as systems integrators and SCADA teams start to tweak their technology to incorporate more IoT-based approaches.

For Engineers trying to access or upgrade data streams from their equipment, whether that be equipment optimization systems, pressures, temperatures, & flows, chemical systems, tanks, pumps, or compressors (to name a few), modern remote oilfield monitoring systems can serve a critical function in partnership with existing SCADA data.

So to answer the question of whether you should choose SCADA or IoT, the answer (of course) depends. Some small and nimble companies might go all-in on IoT because it’s easier to manage with a small team and lighter cash flow. Industry behemoths likely won’t abandon SCADA - both in terms of technology and internal teams - anytime soon. But these organizations too can benefit from augmenting and expanding their data acquisition systems by partnering with IoT vendors that can guarantee access to high-quality data from both critical and peripheral process systems. In most cases, modern companies will likely take a blended approach.

Remember, the goal for any Engineer is to have consistent access to accurate, reliable data that leads to better decision quality and stronger performance trends. Adding an IoT-based remote monitoring system can be a quick win for incremental value.

At WellAware, we are obsessed with decision quality, and we make it our job to serve Engineers by giving them the highest quality data possible, with zero CAPEX costs, and a simple, intuitive interface. We want our customers to put their data to work and arrive at insights that actually lead to reduced failure rates, lower operating costs, and better operational outcomes.

If you’re interested in learning more about how WellAware could support your data acquisition needs, check out our line of Remote Equipment Monitoring solutions. We look forward to getting you the data you deserve.

How SCADA and IoT Equipment Monitoring Can Work Together