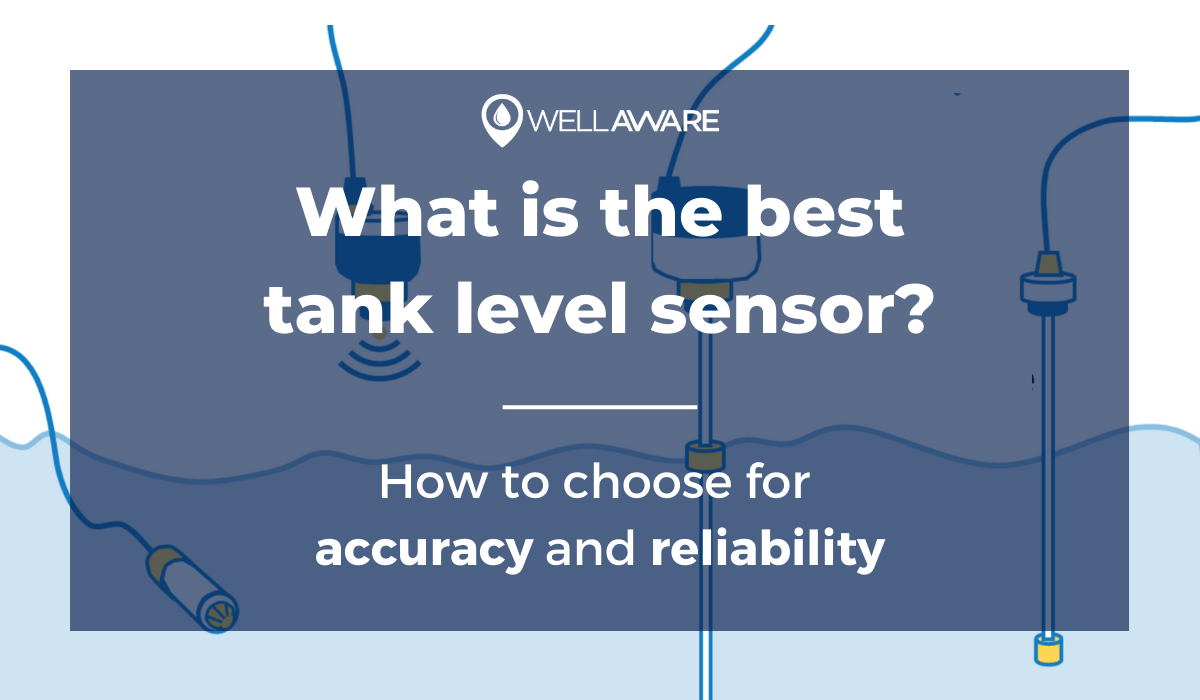 If you keep up with tech innovation in the industrial world, you’ve no doubt heard about the Internet of Things (IoT). The IoT is changing the game in many ways, and the time to get in is now.

But, where should you start? Consider tank level monitoring.

Whether you're monitoring a simple water tank or tracking frac tank levels for a well stimulation job, tank level monitoring (TLM) is a fantastic first step towards getting comfortable with the IoT. And as with any IoT project, the goal of tank level monitoring is to collect accurate and reliable data so that you can take action and deliver results. If your data is wrong, incomplete, or late, your people won’t trust your tank monitoring system, and you won’t get the business results you expect.

When it comes to remote tank monitoring, tank level sensors are the “bedrock” of your solution. Your tank level monitoring data journey starts with your sensors, as they create the data that ultimately informs decision-making. If your tank level sensors don’t collect good data, nothing else matters. The prettiest dashboards and best analytics can’t overcome bad tank sensors.

As they say, “garbage in, garbage out.”

Given how important tank level sensors are to your overall tank monitoring solution, we wanted to share how to choose the best tank level sensor for your project. With a little guidance, you can buy accurate and reliable tank sensors that create great field data without breaking the bank.

There are five common types of tank level sensors:

Finding the best tank level sensor depends on your application, so we’ll highlight the major pros and cons for each sensor to help you choose for accuracy and reliability in your tank level monitoring project.

Want the TL;DR? Skip ahead to our summary matrix to help you choose the best TLM sensor for your application.

Hydrostatic tank level sensors are inexpensive, accurate, consume little power, and have flexible ranges, meaning you can install them in different types of tanks without having to manufacture a new sensor each time.

On the downside, hydrostatic sensors can have higher failure rates because they are often completely submerged in liquid. Especially in caustic or corrosive liquids, this can be a big challenge. One of the most common points of failure in hydrostatic sensors is the cable gland, where fluids can enter and short circuit the sensitive electronics that power the sensor. 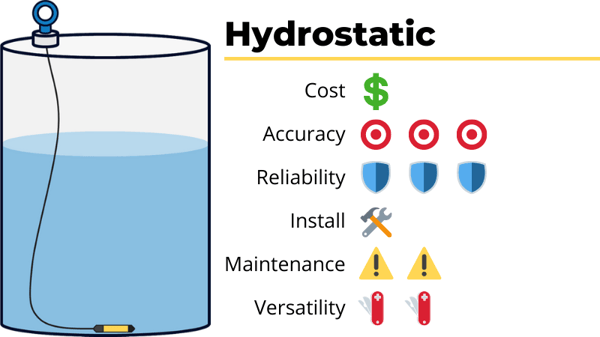 As the name implies, ultrasonic tank level sensors use sound waves to measure liquid levels. They sit at the top of your tanks, “bounce” ultrasonic waves off the surface of your liquids, and then measure level based on how much time it takes to hear the "echo."

One of the main advantages of ultrasonic sensors is that they are non-contact devices; they don’t touch the liquid in the tank. You don’t have to worry as much about fluid compatibility, and they can work well in tanks that have mixers or other moving mechanical components in the liquid (note that the mixers must be off for accurate level readings, as sloshing and turbulence interfere with ultrasonic sensors).

These sensors are also reasonably priced: $300-$400 per sensor on the low end. However, expect to pay closer to $1,000 if you want hazardous area certifications or higher performance.

One of the main disadvantages of ultrasonic sensors is that they consume a lot of power. For comparison, they can consume 10-100x the power of hydrostatic sensors, meaning they aren’t typically suitable for battery-powered installations.

On top of that, ultrasonic sensors tend to require more maintenance than other sensors. You have to install them precisely, maintain a dead band or "blanking zone" between the sensor and the fluid, and occasionally need to clean the sensing element (some fluids can create a film that affects performance)

Lastly, ultrasonic sensors are highly susceptible to noise interference. Foam and vapor can create issues for the ultrasonic waves traveling to and from your sensors. 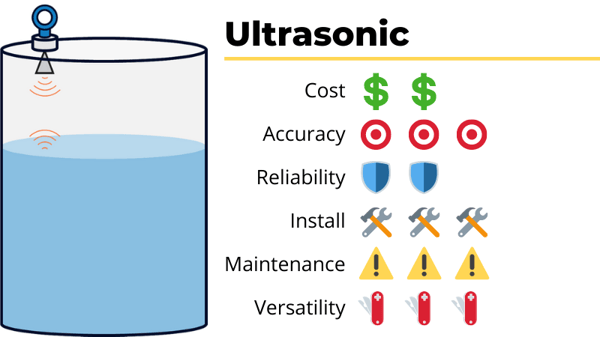 Radar sensors are similar to ultrasonic sensors in that they measure tank levels by how long it takes radio waves to travel between sensors and fluid surfaces. Operators like radar sensors because, like ultrasonics, they are non-contact, but compared to their sound-based counterparts, they are more accurate and better able to handle interference thanks to more precise electronics.

Compared to the other two devices we’ve covered thus far, radar sensors tend to be much more expensive. Expect to pay upwards of $2,000 for a good radar tank level sensor. Despite the more precise electronics, radar still needs a long blanking zone between the bottom of the sensor and the top of the tank. Because light waves travel so much faster than sound, it can be hard to get accurate and detailed readings as tanks fill.

One benefit of radar sensors is that some are capable of measuring fluid interfaces, such as oil in water. The more advanced electronics can even account for some degree of emulsion between the interface and still provide accurate readings. 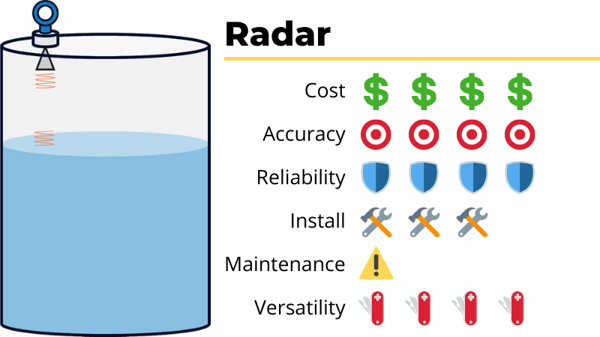 Float sensors extend a probe down into fluids near the bottom of your tank, with floats that activate sensing elements located continuously along the probe. With this design, float tank sensors can be highly accurate. They don’t have problems with noise or interference and can even measure fluid interfaces by using multiple floats for different liquid densities.

On the other hand, float sensors can be very expensive. Float sensor cost is almost directly proportional to the height of the tank. For shorter tanks (less than 5 feet tall), you might pay $1,000 - $2,000. But for larger tanks over 25 feet, expect to pay up to $3,000 or more.

One issue that can affect float tank sensors is "sticking". Although recent technological advancements by some manufacturers have addressed this problem in certain cases, it can still present itself in certain scenarios. In liquids that produce gummy or waxy substances, for example, floats can stick to the probes, causing confusing static level readings. Regular cleaning - or investing in oleophobic probes that resist sticking - can help ensure accuracy for float sensors. 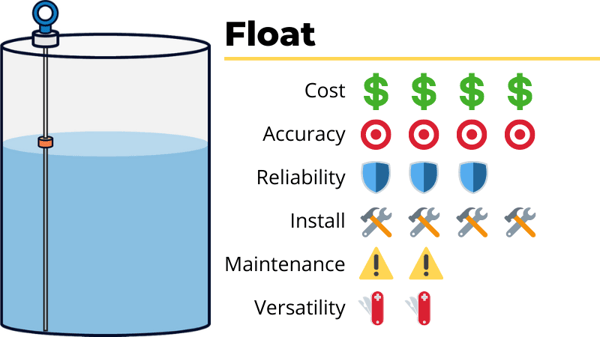 The biggest selling point for capacitive tank level sensors is their versatility. They can be used in a wide array of media, even in non-liquid materials like solids and powders. They are also relatively cost-effective. Compared to the other sensors we’ve discussed, capacitive sensors sit between hydrostatic sensors and radar/float sensors with respect to how much you should expect to spend.

Before purchasing capacitive sensors, it’s important to note that they are sensitive and susceptible to changing environmental conditions. Temperature, humidity, and fluid type can all affect capacitive level sensor readings. Capacitive sensors also require operators to calibrate devices when tanks are both empty and full, which adds a layer of operational complexity. 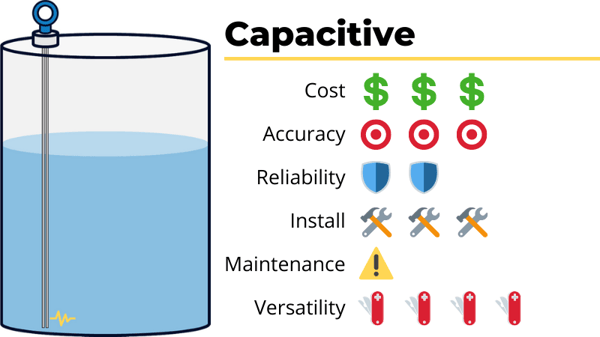 Keeping the Ultimate Goal in Mind

We just threw a lot at you. But, let’s not forget the primary objective: you want better tank level data so that you can make better business decisions, faster. The sensors you choose for your tanks are an important part of accomplishing this goal. 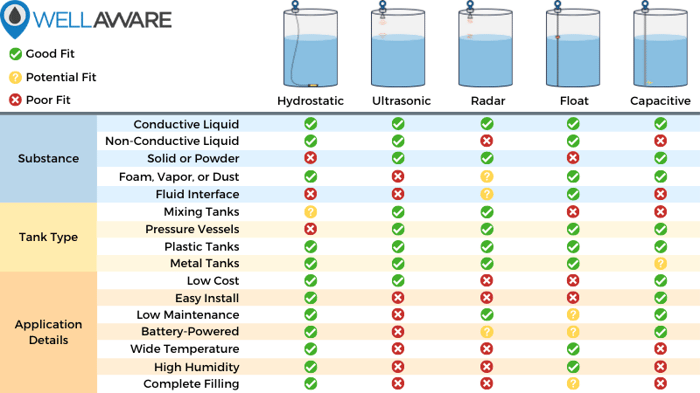 For anyone new to the IoT, striking the right balance between accuracy, reliability, and cost is tough. Fortunately, we designed our tank level monitoring system so that you don’t have to choose.

Connect with us today to learn more. 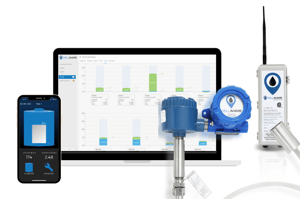 WellAware tank monitoring solutions come pre-packaged with the right wireless tank level sensor for your application, and you can get everything - sensors, data plans, and software - with zero CAPEX.

How to Calculate (and Improve) Pump Efficiency Jun 29, 2021
What's the Best Tank Level Sensor? Choose for Accuracy and Reliability Nov 18, 2020
The Ultimate Guide to IoT Sensors for Industrial Applications Jul 16, 2020
How To Monitor Water Level In a Tank: A Complete Guide Jun 21, 2021
How to Export SCADA Data into Production Software Apr 12, 2021

What is Remote Tank Level Monitoring? How to win with TLM

Here's What You Need to Know About Wireless Tank Level Monitors