Greenhouse gases (GHG) are continuing to dominate the discussion about climate change and sustainability, especially for energy producing and consuming enterprises. Greenhouse gases trap heat in the atmosphere, causing temperatures on Earth’s surface to rise. The most common GHGs are carbon dioxide (CO2), methane, and nitrous oxide, all of which are byproducts of both natural and industrial processes.

There is no debate, however, as to the role that humans play in contributing to increasing global temperatures caused by the increasing GHG emissions intensities. Communities all over the world are having to adapt to changes caused by global warming, some more quickly than others. The fear is that we could be approaching a tipping point in the not-so-distant future.

In 2015, leaders from all over the world gathered to pass a climate change treaty known as The Paris Agreement that set a goal of keeping global warming levels within 2 °C (with a more aggressive reach goal of 1.5 °C) relative to pre-industrial levels. As of 2021, we are not where we need to be.

According to the IEA’s World Energy Outlook publication, global temperatures will be 2.7 °C higher than pre-industrial levels by 2100 if we keep at our current pace. The primary issue is that we are emitting GHGs faster than we can lower or neutralize them.

Consequently, energy producers and consumers are trying to align their efforts with the Sustainable Development Scenario (SDS), a proposal that describes how energy systems can  change to “hold the temperature rise to below 1.8 °C with a 66% probability without reliance on global net-negative CO2 emissions.”

Of course, to hit the SDS goal, we have to 1) accurately and reliably measure our GHG emissions, and 2) generate reports on progress that people can understand and act on. Naturally, the follow-up question is “how?”

Many assume that it’s as simple as powering up and deploying a few smart sensors. Unfortunately, it’s not, and in this blog, we’ll explain why.

Below, we’ll dig into how we measure and report on GHG emissions today, describe the shortcomings of current methods, and discuss a few ways that energy producers and consumers can enhance how they measure going forward.

Part 1: The Different Scopes of Emissions

Energy producers - and most large energy consumers - are required to report emissions to the EPA and/or to state-administered programs that follow EPA standards. As such, these entities must (or should be able to) calculate emissions correctly to fulfill their regulatory obligations.

Moreover, emissions data is often referenced in Sustainability Reports, which are produced voluntarily to attract ESG investments and sow seeds of goodwill to the general public. And as we’ve discussed in other posts, ESG should be on every industrial company’s radar.

But, how accurate is emissions reporting, really?

To understand the answer, we first have to consider three different emission scopes defined by the EPA: Scope I, II, and III emissions. Scope III emissions are harder to measure. They represent emissions derived from activities that are indirectly impacted across an organization's value chain. For instance, Scope III emissions for an oil producer could take the form of emissions generated by a consumer vehicle that is using gasoline refined from the produced oil. Here, we are entering into “triple-dipping” territory.

As you can see, there is a lot of overlap between emission scopes. This makes it hard to measure true global emissions accurately - a topic for another blog. In this post, we are going to focus solely on how companies can calculate direct Scope I emissions successfully.

Part 2: How Scope I Emissions Are Calculated

Spoiler alert: how you calculate Scope I emissions depends on several factors.

The first key determinant is the specific sector an organization operates in. The EPA defines 41 “subparts” that have to report on GHG emissions, and specific reporting requirements can differ across categories. For example, an oil and gas producer might have to report different metrics than an industrial wastewater treatment plant.

At the same time, there are high-level rules that guide multiple industries. For instance, regardless of GHG type, emissions are typically reported in tonnes of CO2 equivalent (CO2e). This creates a standardized measure based on the actual hydrocarbon content of emissions.

The EPA also outlines three common sources of direct emissions, all of which are treated differently in calculations:

In reality, most emission calculations are best guesses and not scientific truths. We don’t often directly measure how much GHG is produced in a given process. However, there are ways we can organize the various emission measurement approaches out there today, at least on the combustion front. To that end, the EPA outlines four distinct tiers.

The Four Tiers of Emission Measurement

Tier 4 refers to the use of a Continuous Emissions Monitoring System (CEMS) that tracks GHG concentration and gas flow rate - it provides the most accurate measure assuming monitoring devices are calibrated properly.

Tier 3 involves measuring fuel characteristics to understand carbon content. Tier 3 measurements are taken less frequently yet are still fairly accurate. When taking Tier 3 measurements, organizations have to assume that certain fuel characteristics are relatively stable. Some use flow meters to measure actual fuel consumption and translate those figures into emissions.

Tier 2 measurements might use default or fuel-specific characteristics to track emissions. The EPA refers to these characteristics as “emissions factors.” For these factors, organizations use known averages to ultimately arrive at emissions estimates. So, instead of metering, an operator might use an indirect indicator of fuel quantity measurement (e.g., the amount of fuel purchased).

Tier 1 measurements are based entirely on default values and indirect measures of fuel quantity. They are the least precise of the four EPA tiers. 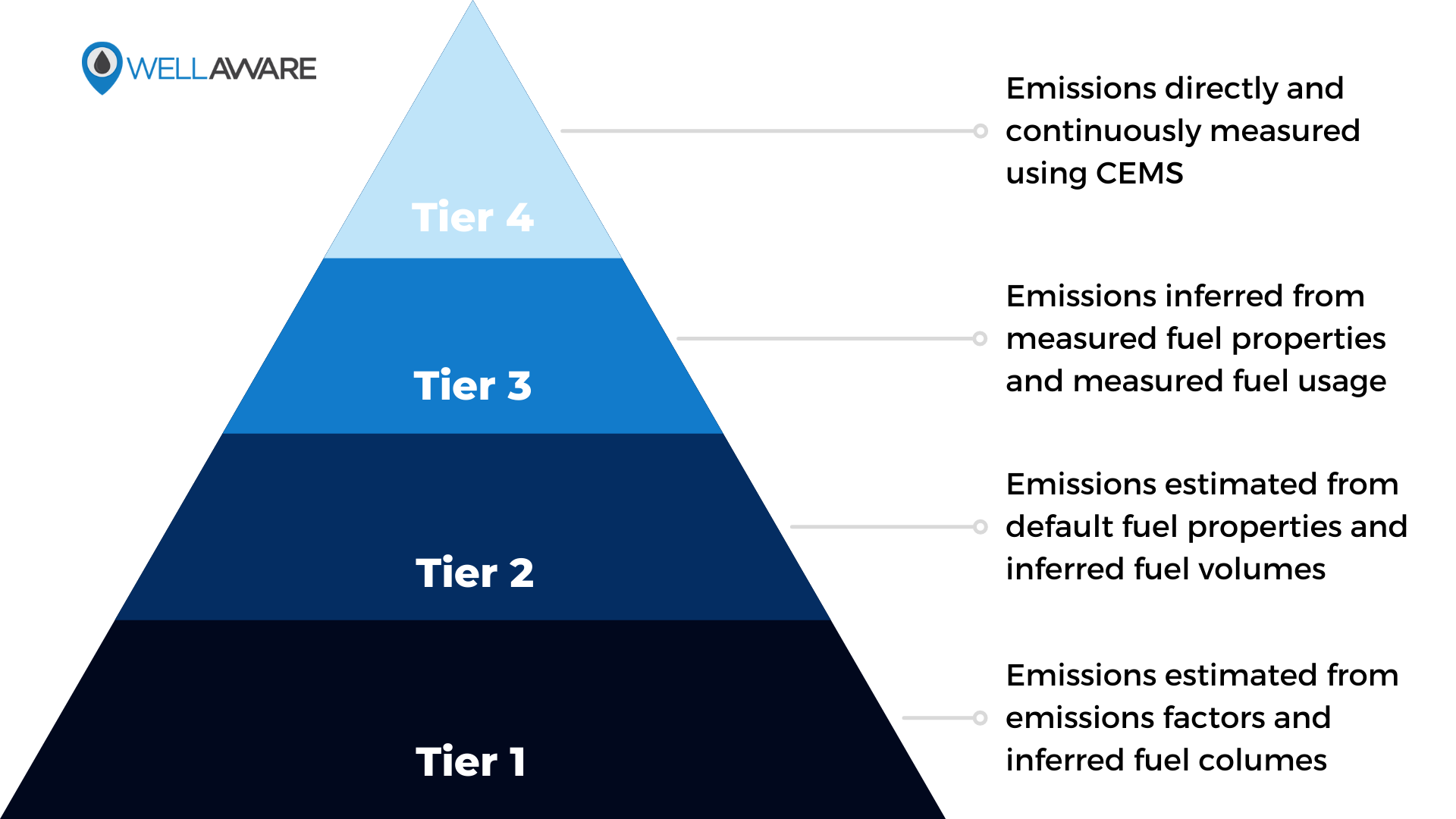 Today, CEMS are not widely used because they are costly, and metering capabilities aren’t installed on many types of assets. In addition, they are only required on relatively few types of industrial facilities. Consequently, organizations will often resort to defaults or inferred measures of consumption AKA Tier 1-3 approaches.

Remember: everything we just covered is only for combustion.

Measuring fugitive emissions is much more challenging. Fugitive emissions are - pound for pound - more detrimental to the environment, because they don’t involve combustion, which removes some carbon content from gases. And while CO2 byproduct still contains carbon, it doesn’t move the needle as much when it comes to global warming.

Venting and leaks, on the other hand, release more methane and nitrous oxide into the atmosphere, as well as VOCs. Compared to CO2, methane has 25x more global warming potential. Nitrous oxide...298x more.

Because venting can be a controlled process, emission measurements have the potential to be somewhat precise. You need to know how your equipment works, how much gas is needed to keep it running, and how long it should be operated. Still, in most cases, organizations use default numbers based on industry averages when computing emissions.

Things get trickier on the leakage side, because operators first have to detect leaks. Fortunately, the EPA has published emissions factors to help organizations approximate venting and leakage based on assumed amounts.

For example, emissions from pneumatic devices that use natural gas are calculated as:

Why is this not precise?

For one, emissions factors - default values for part types - don’t factor in installation, maintenance, and other characteristics that can affect GHG production. Second, many organizations don’t know exactly how long every piece of equipment gets used, making it hard to estimate total usage time.

In reality, emissions factors can be useful for assessing overall emissions from large populations. They represent average emissions rates for each of those parts. And because of this, a company’s emissions profile is mostly based on how many of those types of equipment they operate and how long they operate them for (a number that is often assumed).

Why is this a problem? When we use emissions factors, we don’t see any separation in emissions intensities from like-for-like companies. To put in more plainly, if Company A operators the exact same number of valves, connections, and tanks for the exact same amount of time as Company B, then using the emissions factors approach they would have identical emissions intensities. But in reality, Company B does a worse job of installing and maintaining their equipment, so they actually emit significantly more than Company B. 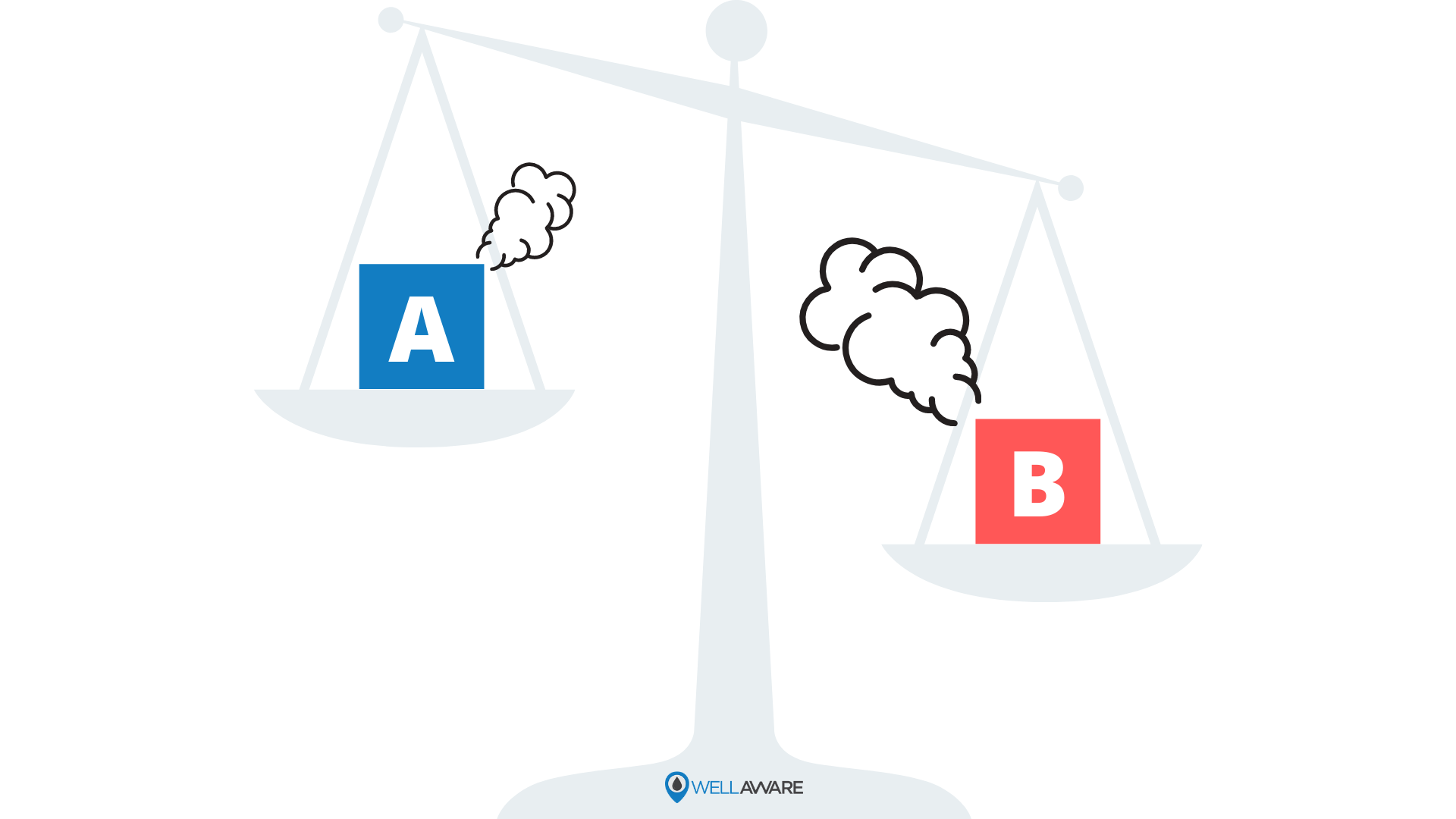 Using emissions factors, companies may appear to have identical emissions intensities based on what they operate, when in fact they emit differently based on how they operate.

Without precise measuring, we can’t identify the egregious emissions offenders, and we can’t get them corrected. In essence, we’re trying to reduce our emissions by reducing the number of emissions sources, not operating those sources more effectively.

So how do we improve on GHG emissions? To put it plainly, we need to strive to actually measure rather than estimate. The problem is that measuring is complex, expensive, and occasionally inaccurate (see CEMS above).

Below are a few alternatives.

At the very least, we can measure GHG gas flows at different stages. For instance, if we measure produced gas flows at a natural gas well, subtract out everything we combusted and measured at a flare stack, and then measure again at the sales point, we could calculate fugitive emissions between production points and sales points.

Obviously, this is an oversimplification, but the idea is that metering and measuring can add precision to our calculations instead of using default or indirect factors.

With respect to leaks, there are other technologies in use today. In some cases, satellite imagery is useful, but that approach generally only detects large emissions events. While important, it’s not necessarily useful for calculating “steady-state” fugitive emissions.

Other advancements in GHG sensing are gaining momentum. Project Astra is a notable movement in the Permian Basin. Multiple oil and gas operators and research institutes are creating an in-field sensor network to measure methane emissions. The project could prove fruitful if sensors are accurate and distributed at enough density to allow for more accurate modeling. At the very least, the solution can identify leaks sooner, which is one of the best ways to limit emissions.

At the end of the day, if we can’t measure emissions volumes, we can at least do our best to prevent leaks altogether. And with modern remote monitoring technology, this can be as simple as installing pressure monitors on pipelines and vessels to detect anomalies that indicate leaks as soon as they begin.

To summarize everything we’ve discussed: the world needs to reduce GHG emissions. The current target is for us to be net-zero by 2070, and the more aggressive IEA outlook is targeting 2050, if possible.

To get there, we have to accurately measure progress to make sure we are tracking well against these timelines. The only way to do that is to continue to advance how we measure emissions and prevent leaks. At WellAware, we have full confidence that technology and human ingenuity will get us there.

How We Stayed Online During Winter Storm Uri