Why Oil and Gas Companies Should Care About ESG

You’ve heard the whispers. Everyone is talking about sustainability this, ESG that…and with the start of the Biden presidency, the oil and gas industry is on edge - will a more liberal administration bring new frustrations and red tape for producers?

It’s a fair question. But the exact answer may not matter for our purposes here.

Regardless of the legal or regulatory standards in place, sustainability - and specifically environmental, social, and governance (ESG) practices - should be top of mind for nearly every O&G executive out there. Energy producers, both public and private, have to be thinking hard about these topics. Otherwise, they will face tremendous challenges in the coming decades.

If you aren’t convinced yet, we hope this article will help tip the scales. Below, we spell out the biggest reasons why sustainability and ESG should be a part of your long-term plan starting today. Fortunately, it’s not too late to get on the right path, which is something we might not be able to say in a few years.

As we covered in our last blog post, much has already been said about sustainable investing. People have been talking about it (and doing it) for years. In fact, the first global sustainability benchmark, the Dow Jones Sustainability Index, launched over 20 years ago in 1999. However, things have really changed recently.

In 2019, ESG investment flow nearly quadrupled compared to 2018. And while we are still waiting on the final 2020 numbers, we know it was another huge year. By October, sustainable funds had pulled in $30B, $8B more than 2019’s total. When the calculations are done, we expect 2020 to more than double 2019 marks, which would mean we’ve witnessed an 8X (!!!) increase in sustainable investing in just two short years.

All in all, over one-third of U.S. investments have gone toward sustainable funds in the last year, and that number is expected to rise. According to one Bloomberg article, PWC estimates that more than half of mutual funds, nearly 60%, will be ESG-focused by 2025. 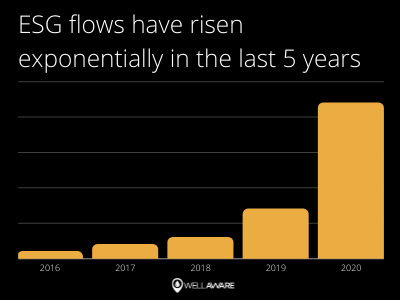 Long story short: hop on board, the ESG train is leaving the station.

But why should Oil and Gas companies care at all about broad ESG trends? Three reasons:

Oil and Gas Companies Are Struggling

Life has not been easy for Oil and Gas companies lately. Oil prices have been unstable ever since the late 2014 high of over $100 a barrel. In 2015, prices plummeted to less than $25 a barrel, as global oil supply overwhelmed demand. Yet, the industry was resilient, building back up to over $70 a barrel. Drilling programs picked up, and producers took on debt to keep things moving.

Then, the COVID-19 pandemic, a situation no one could have predicted, came along and absolutely crushed demand for hydrocarbons. Business and personal travel ground to a halt. For a brief period in April, oil prices went NEGATIVE - put simply, oil producers were PAYING people to come pick up their oil.

Months later, traditional energy stocks are still down, despite the S&P 500 hitting record highs in recent weeks. In the last two years, the S&P 500 has risen by nearly 45% overall. In the same period, the SPDR S&P Oil & Gas Exploration & Production ETF (XOP) has been a mirror image - losing nearly as much as the S&P 500 has gained (check out this chart).

The S&P Exploration & Production ETF has lost half of its value in just 2 years. Source: Yahoo Finance.

On top of that, Oil and Gas credit ratings are in the tank, and bankruptcies loom around every corner. Over 100 Oil and Gas companies went bankrupt in 2020, which includes industry giants like Chesapeake Energy. In total, there were 14 $1B bankruptcies last year. That’s a lot of debt in the courtrooms.

Of course, most of you know how hard 2020 was on the energy sector. You lived it. But even without COVID-19, something has to change.

At a high level, Big Oil is on the outside looking in when it comes to ESG funds. O&G investments dropped by 29% between 2019 and 2020, well below half of 2014 numbers. However, there isn’t less money going around. Money is moving...it’s just moving further and further away from oil and gas to ESG funds - where oil and gas companies make up only a paltry share.

For example, the iShares MSCI USA Select ESG Fund, with net assets of almost $2.5T, lists only 8 energy producers out of 205 holdings. Those producers only account for 2% of the fund’s total assets. Furthermore, only 3 of those producers (HESS, COP, and OXY) are engaged in E&P activity.

Put simply, a majority of energy companies aren’t getting invited to the party. And those that are don’t appear to be making the most of the opportunity. 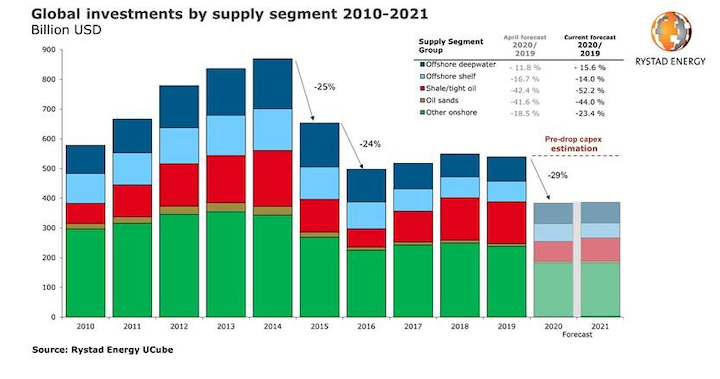 Fortunately, there’s a silver lining to all this - it’s not too late for energy companies to grab a seat at the table. Energy markets are stabilizing, and the outlook for 2021 is much stronger in terms of oil prices. And the reality is that we are still a hydrocarbon-dependent society, and will be for a while. The IEA doesn’t expect carbon demand to peak until around 2040.

More important, energy companies still have the potential to position themselves as sustainable businesses relative to their peers. ESG standards are still being defined and refined, which means Oil and Gas companies have the potential to influence how they are ultimately judged. By transitioning operations to more sustainable practices today and shifting production to more sustainable natural gas, energy executives can catch the wave before it crashes over them.

To be clear, this isn’t about greenwashing or appearing sustainable on the surface. What we are talking about is achieving meaningful sustainability as we progress through the current energy transition. It’s about Oil and Gas producers and transporters assuming leadership and taking proactive steps to promote U.S. energy independence even after we transition to net-zero.

But, we do expect the energy they produce to change. In case we haven’t made it clear enough already, ESG is not some passing fad. It’s not a nebulous concept you throw capital at in hopes of getting something in return.

There is real money and value to win here.

ESG funds will continue thriving over the next decade. Those who position themselves well will lift with the rising tide and stand opposite the fire hose of investor capital that’s waiting to be deployed.

For the sake of their survival, oil and gas companies need to find a way to get on the ESG VIP list. And we certainly believe they will. In 20-30 years, our country’s top energy producers will be around. For over a century, oil and gas companies have been our world’s most reliable energy producers. We don’t expect that to change. But you better believe the source of energy will.

Sustainability: Finding a higher purpose for the Internet of Things