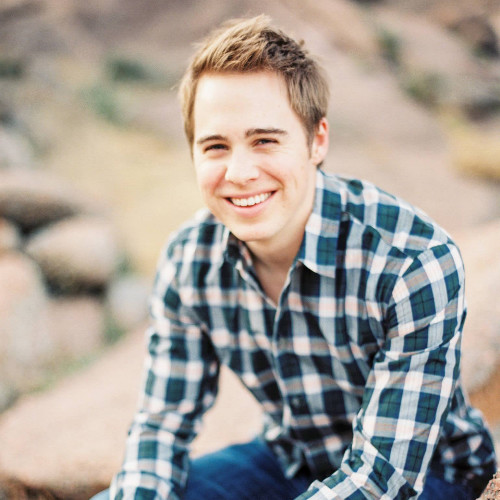 How We Stayed Online During Winter Storm Uri 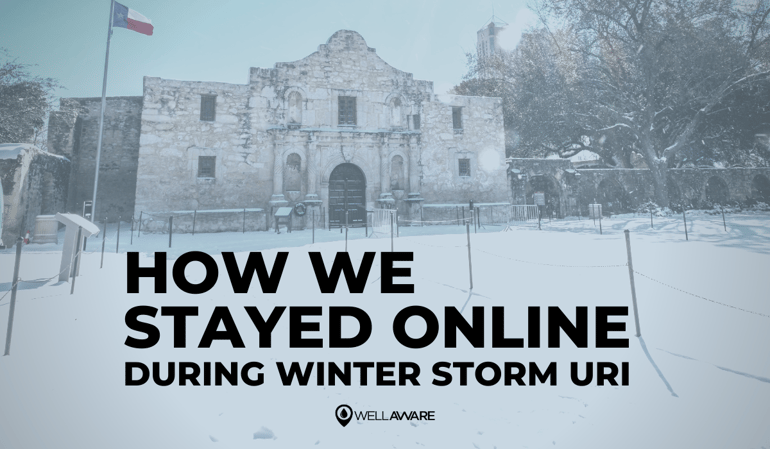 Last week, Winter Storm Uri brought freezing temperatures, snow, and ice to much of the southern United States, namely Texas (WellAware’s HQ). Millions lost electricity, heat, and running water (as a result of water pumps failing due to lack of power) - in some cases, people lost their lives.

One of the primary reasons Uri was so damaging was because the state was unprepared to handle such low temperatures and high snowfall. Critical infrastructure across Texas was not sufficiently winterized, leading to devastating consequences. People are still struggling to get back on their feet and, for many, the recovery process could take months, perhaps years.

We tend to take amenities like clean water, power, and warm shelter for granted. We expect these essentials to be readily available and seldom question their reliability. The winter storm revealed how infrastructure and systems can fail us, even in the modern world.

While power grids and water pumping stations were failing, WellAware’s many thousand edge devices in key Texas energy-producing regions (i.e., West and South Texas) stayed online. This was no mere coincidence or stroke of luck. Our IoT edge devices held steadfast against the storm because of our design approach and philosophy.

Below, we share five pillars of our design philosophy that underpin our “harsh and hazardous”-ready platform. We’ve taken this approach for times like these. We want our customers to be able to gather rich and reliable data at all times, no matter what is going on in the world.

First and foremost, you have to set yourself up to collect reliable and accurate data at the source - AKA at the edge - where information is sensed and digitized. To do this, you need certified hardware and weatherproof enclosures that safeguard your devices, and consequently, your data streams.

Without dependable IoT hardware, both at the component and system level, edge devices WILL fail, especially when facing once-in-a-generation severe weather conditions. You also have to consider other “component systems,” such as exterior cabling, connections, and modems, that are prone to failure, interdependent, and often directly exposed to the elements.

For these reasons, we designed our Connect family of devices to function as a single standalone unit, with all necessary componentry, housed in one enclosure. The Connect is a low-power sensor transmitter, rugged industrial gateway, flexible network modem, and programmable logic controller packaged into one smart, simple box. By reducing the number of inter-component dependencies, we’ve increased the overall dependability of our product.

An often-overlooked topic in the IoT hardware conversation is the importance of having high-quality components and sensors that gather accurate data. To put this plainly, if you can’t trust your devices, you can’t make good decisions for your business.

Moreover, low-cost electromechanical components don’t stand up well to extreme weather or last very long. The same goes for process sensors. With poor-quality devices, you run the risk of collecting bad data or no data at all.

In the image below, you can see one of our Class 1 Division 2 (C1D2) certified, ruggedized, weatherproof IoT devices sitting on top of a well water tank during last week’s winter freeze. Even at -6 degrees Fahrenheit, our component systems and edge devices remained online. 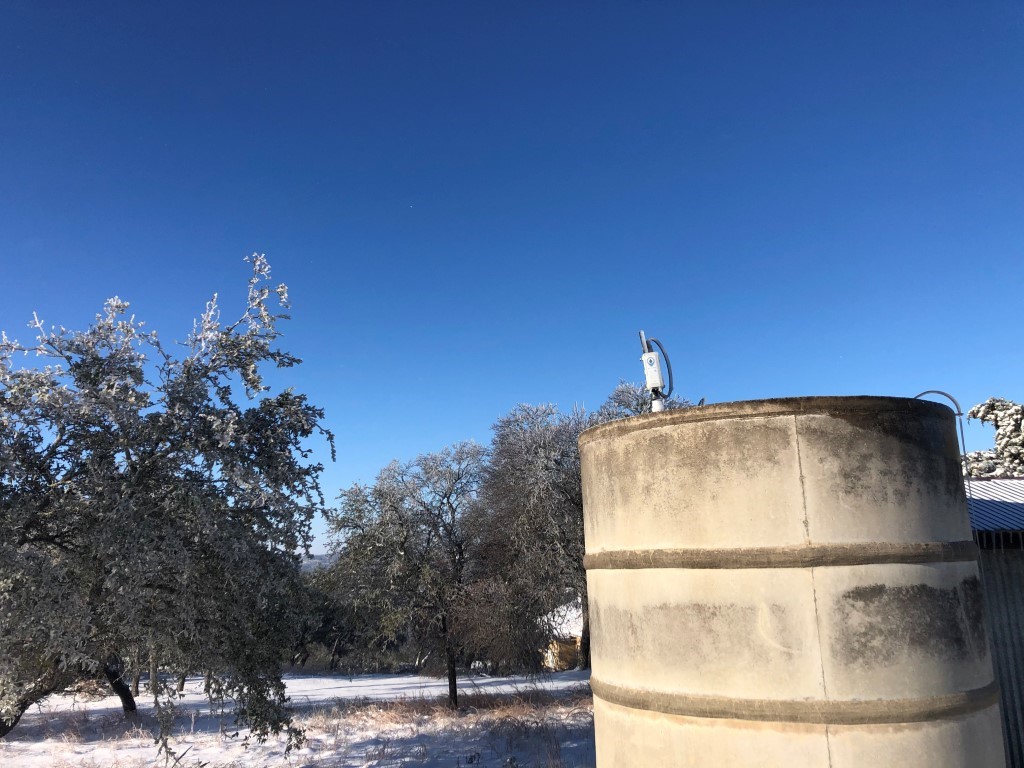 Consequently, our customers saw no interruption in their data. In the following screenshot, you see a continuous flow of data through the coldest hours of the storm from one of our deployed devices. 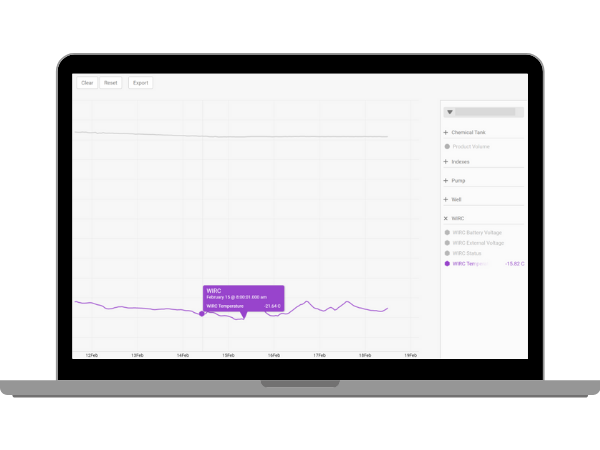 At the end of the day, quality hardware leads to quality data, which ultimately yields positive results. It’s near impossible to capture good field data (especially in extreme conditions) with cheap, unprotected components.

In addition to having dependable IoT hardware, you need reliable networking infrastructure partners and well-vetted backup plans. On the networking front, we like cellular because it is ubiquitous, reliable, inexpensive, and secure.

Cellular network providers are all in on the industrial IoT, and they’ve rapidly expanded their networks to accommodate even the most remote assets of their largest industrial customers. The result is nearly 99% LTE coverage across the United States. That’s hard to beat, even with private infrastructure.

What’s more, cellular service providers are very good at maximizing network dependability, with fault-tolerance built in at every layer.

Finally, we trust cellular security. Cellular IoT networks are secure by design, and we use them in a way that maximizes those security features.

We know...this might sound a little ridiculous. But you should have a backup plan for when your networking partner’s backup plan fails. If you plan to offer at least 99.98% data reliability, as we do under our data reliability SLA, you must account for every circumstance. For this reason, all of our edge IoT devices have store-and-forward capability.

“Store-and-forward” means that devices recognize when they can’t connect to a network and, as a result, store data temporarily to forward to the cloud once connectivity is restored. If you don’t have store-and-forward functionality, you end up with large gaps in your data streams in extreme events that impact network coverage, like what happens when facing intermittent connectivity drops during a record-shattering snowstorm!

We designed our Connect smart IoT devices with store-and-forward so that operators don’t have to worry about critical assets going off the grid. Our IoT hardware products will hold data until they independently detect that wireless service is back online, which helps take the teeth out of networking failures when they do occur.

Bad power shouldn’t stop good data. When designing IoT edge architectures, you should think about how you can take control of your own destiny when it comes to powering your network.

When external power systems fail (which we saw in spades during last week’s storm), remote asset visibility can disappear if devices don’t have an independent power source for failover. And industrial operators can’t afford such downtime.

We equip all of our Connect and Sense IoT edge devices with weather-resistant lithium-powered backup battery systems to ensure they can continue collecting measurements and sending data whenever large-scale power systems fail. By supplying each of our edge devices with an independent power source, we prevent minor issues from growing into much bigger problems for our customers.

Don’t Interrupt a Work Day Unless You Need To

The inherent value in edge IoT networks is that they generate real-time visibility to issues that need to be solved ASAP. In the case of the recent winter storm, perhaps operators would have been well-served if they could have responded more quickly to impending asset failures. We aren’t saying that temperature or power alarms would have kept every American on the grid during Uri; some things are unavoidable. However, we think that better alarming could have at least reduced the negative impacts.

This is why we design your IoT network to alert operators ONLY when absolutely necessary. We don’t want devices pinging field technicians unless there is a real problem that needs solving. We want these technicians to trust their alerts, and respond ASAP. When hardware interrupts too often, it creates “alarm fatigue” that inevitably leads to “boy-who-cried-wolf” situations.

Alerting appropriately is an important part of processing field data effectively. In addition to configuring the right alarm triggers, we design our IoT solutions to populate dashboards that help our customers optimize processes and enhance asset performance.

For WellAware, effective alarming and incident management means implementing features like incident threading, auto-acknowledgements, cascading alarm precedence, and other tools that enable our customers to manage thousands of devices and alerts seamlessly. Below, you can see an example of a WellAware alarms dashboard that you would use to monitor different types of assets and organize efforts around specific interventions. 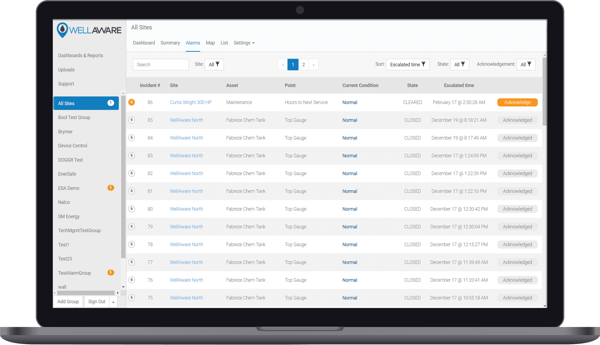 As you can see, a lot goes into building and maintaining industrial IoT infrastructure that can survive even the harshest of conditions. We’ve done the hard work, and last week’s winter storm proved the value of our efforts. Our clients maintained visibility over their assets, never suffering from data interruptions or power loss.

While Uri was a remarkable storm, there will inevitably be other situations that could put IoT networks at risk for those who don’t invest upfront in a quality solution. To learn more about the fault-tolerant IoT edge devices we sell, click here. If you’d like to speak with a WellAware expert today about your IoT hardware needs, contact us today.