How to automate hydrate inhibitor in oil and gas operations

It’s common knowledge in the oilfield that, as the weather turns colder, methanol use ramps up. Operators across the globe turn to methanol, and hydrate inhibitors like it, to prevent serious operational issues.

But what, exactly, is methanol used for in oil & gas? How do hydrate inhibitors in oil and gas work? And most importantly, how can automation improve methanol performance to reduce waste and associated costs without hindering equipment performance or flow assurance programs?

In the following article, we’ll answer each of these questions, and also show you how you can actually automate methanol injection to eliminate methanol waste.

What is methanol used for in oil & gas?

When natural gas is produced from underground reservoirs, it always contains some amount of water vapor. At temperatures below 32°F (0°C), water will freeze at atmospheric pressure. 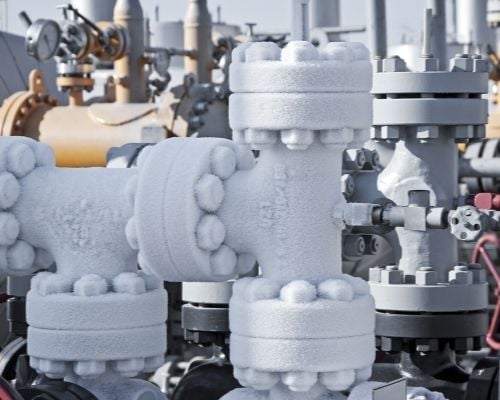 How does methanol prevent hydrate formation?

As a so-called “hydrate inhibitor,” methanol prevents hydrate formation by reducing the freezing point of water. When used with the proper dosage, methanol can eliminate hydrate formation in natural gas streams by keeping the freezing point of water below the temperature in the natural gas stream, hindering the creation of ice solids that cause freeze-ups.

When using methanol in natural gas processes, operators and chemical managers need to know how to calculate how much methanol to inject based on process variables in the natural gas stream.

The theory can be relatively complex, involving a precise understanding of the following variables, at the least:

Capturing these variables in real time can be very challenging in the oilfield, which is why, in practice, the methanol injection calculations are much… simpler. 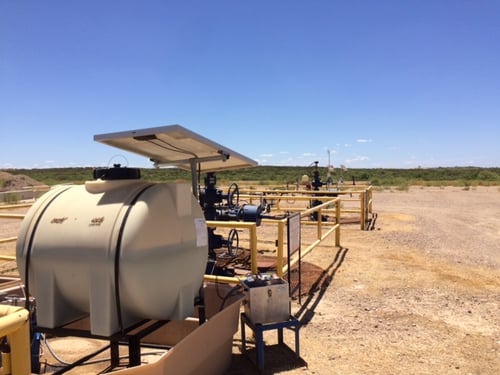 Methanol rates typically need to be increased after warm weather dissipates, but ambient temperature is not the most important variable for determining methanol requirements.

It usually goes something like this: “When the weather gets cold, ramp up the methanol! If we’re getting freeze-ups, more methanol!!”

While this approach might be easier to implement in the field, it produces subpar results. Why? Because the freezing point of water in a pipeline depends on more than just temperature, and because the temperature inside the pipe can be very different from the temperature outside of the pipe.

Pipelines can be steamy even in the dead of winter or frozen solid in the summer heat. Ambient temperature simply isn’t a reliable way to determine methanol dosage.

And this is why methanol waste is so rampant in the oilfield. With little insight into how much methanol to inject, operators tend to err on the side of avoiding downtime, increasing methanol injection rates far above what is required.

The result is expensive.

Based on data we’ve gathered from oilfield chemical injection systems that we’ve automated across the United States, we estimate that in the US alone, oil & gas companies inject at least 2 billion gallons of methanol and other hydrate inhibitors a year. Defined in terms of dollars and cents, that’s roughly $5B to $10B a year that oilfield companies spend to solve the problem of hydrate formation in the natural gas supply chain.

Ten billion dollars ain’t chump change. That’s big money that producers and processors alike want to trim down. And this doesn't include the additional costs to remove methanol waste and byproducts during gas processing and refining stages.

The good news is that thoughtful automation can flip the script, and not only reduce the cost of methanol, but actually result in fewer freeze-ups and more uptime for compressors, pipelines, and processing plants.

How to automate methanol injection

And look, it doesn’t have to be perfect. Even simple automation rules can result in significant improvements over the status quo.

To create a meaningful impact on your methanol program, the right pump controller should do 4 things:

Why these four things?

First of all, if you're just starting to tackle your methanol program, you need a pump controller that works on a wide variety of pumps. If you’re like most oilfield operators, you haven’t standardized on a single model or even manufacturer. OEM pump controllers might not work with all your pumps.

Second, you’ll need the external monitoring and logic to actually implement the methanol rate control that leads to a meaningful cost and downtime reduction.

And finally, you want to make sure it’s working! Pump controllers should send data that confirms how much methanol was injected (for example by including methanol tank monitoring), notify your team of any issues (such as a power failure or an empty tank), and even provide feedback on performance (for example by monitoring compressor suction and discharge pressures). 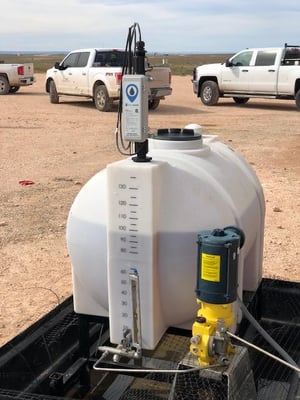 The WellAware Connect Pump Controller controls many different makes and models of chemical pumps, and includes wireless automation to monitor process parameters like pressure and temperature.

Setting up the automation logic

As we said, the theory of methanol dosage calculations is complex. Yet even a modest improvement in automation logic can create some serious benefits, so let’s start simple.

Remember, methanol prevents freeze-ups by dropping the freezing point of water below the temperature of the gas stream.

In the simplest terms, we could simply only turn on methanol injection when the process temperature in the natural gas pipeline drops below 32°F (0°C).

In most situations, this will create an immediate improvement in methanol usage because you’ll be relying on automation - not human intuition - to control your methanol rates.

Said in a different way, you’ll no longer have to worry about Joe Pumper cranking up the methanol on a Friday because he’s planned a weekend fishing trip and doesn’t want a compressor freeze-up keeping his boat tied up at the marina…

It also doesn’t account for pressure or temperature drops across pipe segments, and the speed at which the gas moves through these segments. It also won’t factor in the water content of the natural gas.

And again, this requires that you are using process temperature, not ambient temperature.

Still, with this simple approach, you’ll be on your way to cutting your chemical costs without increasing your downtime risk, which is music to every oilman’s (or oilwoman’s) ears.

And if you start simple, you can always layer on the added variables later on down the road when you are ready to further optimize your methanol control. 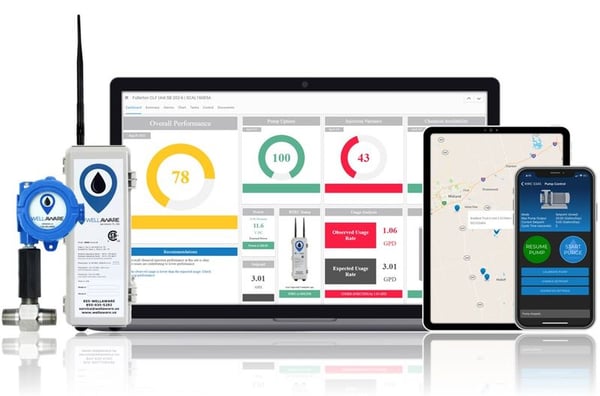 We’ve been automating oilfield chemicals for nearly a decade, and methanol is no exception. If you’re interested in an out-of-the-box methanol automation package that can control your methanol rates based on process temperatures, monitor methanol usage, and even alert you to methanol pump failures, check out our solution at wellaware.us/oilfield-chemicals/methanol.

Tips for automating corrosion inhibitors in oil and gas