Can I install automation if my site doesn't have cell coverage? 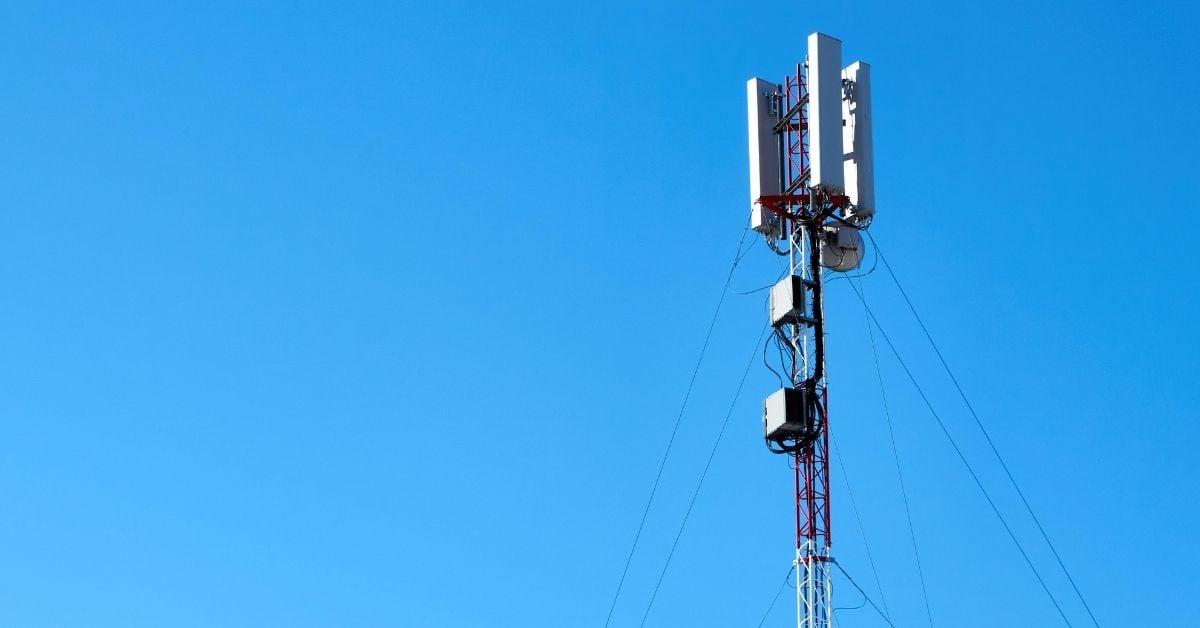 Oilfield automation systems, including things like tank level monitoring and remote pump control, require an internet connection to send data. Unless the devices are connected to a completely air-gapped SCADA system, they’ll connect to the internet at some point.

Note: Most modern SCADA systems now use cloud-based data historians like those offered by AWS. Even if you aren’t using a public network, that data is almost always going to hit the internet eventually, it’s just a matter of when. There are many reasons why this needs to be, but they are too many to discuss and not the subject of this blog!

What networks work for remote monitoring in the oilfield?

In remote oilfield environments, we generally have two options for wide area networks (WANs) that can connect our tank level monitors and pump controllers to the internet: Cellular and satellite. Even if you are using a long-range low power network like LoRa, you’ll need a gateway to the internet at some point, and most likely that gateway will include a cellular or satellite modem.

While new satellites are being launched every day, and the cost of satellite networking is coming down while bandwidth capacity is going up, the discrepancy in cost-to-bandwidth ratio is still quite large.

For example, a typical cellular plan can usually cost somewhere around $1 per megabyte of data (or much less at scale), whereas global satellite plans can cost upwards of $1 per kilobyte. Put simply, satellite data costs on the order of 1000x more than cellular data. For more details on the cost of a tank level monitoring system, read this blog.

Because of the discrepancy in cost, the demands for higher-resolution data, and the increasing need for remote control, most oilfield automation buyers prefer to choose devices with cellular networks.

What happens if I don’t have cellular coverage?

This is a question you’ll likely ask if you’re in the market for oilfield automation products, and with good reason. Oilfields are remote environments, and many of them don’t have enough cellular signal to send a text message, much less connect to the internet.

To answer the question of what to do if you don’t have cellular coverage, we first assume that satellite is a “last-ditch” effort to make a connection. Satellite networks do provide near global coverage so long as the device has line of sight to the sky, but the cost of data and the low resolution position it as a worst-case choice. 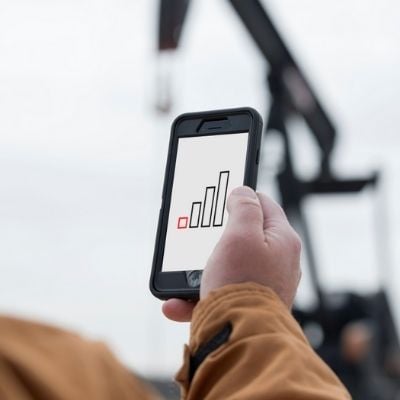 Remote oilfield locations can offer little to no cell reception on your phone.

So, what do you do when you’re on a site where you might want automation, and your cell phone says “No signal?” Here are some things to consider when figuring out what to do if you don’t have cell coverage at your site.

So, if you’re on location and you get an intermittent “bar” here or there, it’s likely your automation device will work just fine. If you can receive or send a text message, you’re good to go.

If you have absolutely zero signal on your phone, then we still have options.

Automation devices can use multiple carriers

The signal on your cell phone depends on your carrier, and if that carrier has a communications tower that covers your location. Unless you have multiple phones with multiple carriers, there will be areas or pockets where you don’t get coverage but other people - with different carriers - do.

The same applies for automation devices. For stationary deployments - where the asset your monitoring won’t move for a long time - we can dial in the very best carrier to ensure the best possible connection at that specific location.

So even if you have no signal with Verizon, there’s a decent chance we can make a connection with AT&T or T-Mobile. We can do the work beforehand, check tower locations, and select the very best carrier for your site.

Most automation devices, like tank level monitors, come with a higher gain antenna than your cell phone. “Gain” refers to an antenna’s ability to amplify a signal to the point where it is usable by the device electronics. The higher the gain, the more likely your automation device can make a successful connection.

Most integrated phone antennas offer somewhere between -7 dBi and 1 dBi of peak gain (positive numbers are better). The standard antenna on a WellAware tank level monitor, for example, has 3 dBi of peak gain. While that may not seem like a huge difference, dBi is a logarithmic number. Put simply, a 3 dBi antenna doubles the incoming signal, whereas a 1 dBi antenna provides about a 12% increase. Read this if you want to better understand the dBi scale. 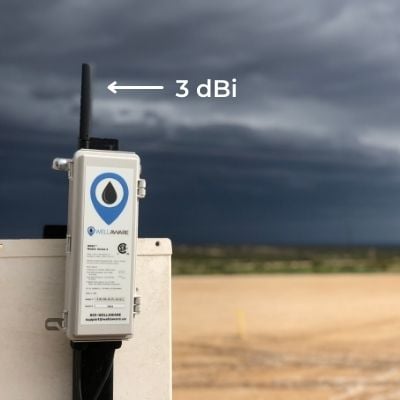 In the simplest terms possible, the WellAware antenna (as an example) is somewhere between 8X and 40X stronger than your cell phone antenna, so what your cell phone shows as “No Signal” could look like 3 bars on your WellAware device.

And if the standard antenna still doesn’t cut it, we can always install a remote-mounted, ultra-high gain antenna (8 dBi or more). We do this for a small handful of locations, and it works to great effect.

Have you ever been sitting in your house or office, and sometimes you have decent cell coverage while other times you don’t, even if you’re sitting in the exact same spot?

That’s because cell signal strength at a particular location can fluctuate based on things like weather and interference. Sometimes, these outages are even caused by maintenance to a particular cell tower. 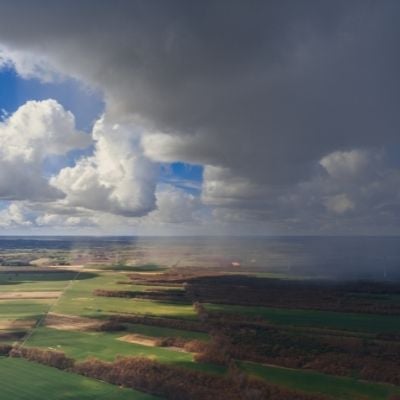 Severe weather can temporarily create cellular network outages. In most cases carriers will repair outages within a few days.

Because of this, oilfield locations with automation devices can experience temporary coverage gaps that could last minutes, hours, or even days.

Fortunately, some automation devices can account for this. WellAware tank level monitors, for example, will detect when the signal is too weak, and store data locally. The device will keep trying to send data until it succeeds, and then upload all that stored data. The data may come a little late, but you won’t have gaps in that data. We call this “store-and-forward,” and it is a critical part of our 99.5% data availability guarantee.

A note about network sunsets

In case you haven’t heard, the major cellular carriers in the US are shutting down 3G networks. As of February 2022, AT&T has completely shut down its 3G networks. Verizon has begun phasing out 3G networks, with the final shutdown scheduled for December 31st of 2022. 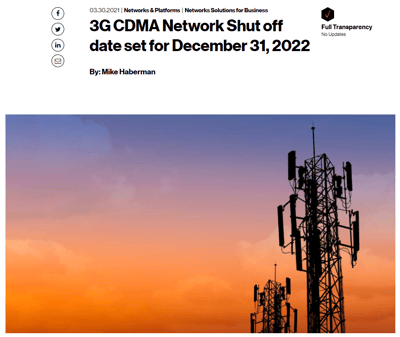 An announcement on Verizon's website about its upcoming 3G network sunset, scheduled for December 31st, 2022.

What does that mean? If you buy or have bought an automation device that uses 3G networks to connect, it won’t work once the carrier shuts down that network. There are quite literally hundreds of thousands of deployed automation devices that rely on 3G. All of them will need to be replaced.

WellAware devices use 4G LTE connections. Most expect that 4G LTE will remain active for at least a decade, but at some point the carriers will shut down 4G to make way for something new (10G? Who knows…).

If you deploy automation devices, it’s important to think about the long haul. There are plenty of 3G buyers who thought their devices wouldn’t outlive the shutdown, and now they’re on the hook to replace them.

That doesn’t necessarily mean you should buy 5G devices. 5G networks are major overkill for most oilfield automation networks, and they are more expensive.

But, it does mean you should think and plan ahead. WellAware customers have the benefit of our lifetime replacement warranty under contract. If your WellAware device ever becomes obsolete because of a network sunset, we’ll replace it for free.

Oilfield chemicals companies have no choice but to automate